Where are you when a superfat person posts a bikini photo and is rewarded with, not the accolades you receive for your vulnerability and bravery, but uniform disgust?

Where are you when fat activists are exhausted at every turn by trolls?

Where are you when it comes to taking direct action to improve the lives of people who are marginalized?

This week, I challenge you to get out of your social media comfort zone. Here are four things you can do to change culture and build your business in a more ethical way.

I challenge you to find accounts run by people whose bodies make you uncomfortable. Follow them and support and share them until you no longer have that reaction. Center their bodies instead of your own.

Comment on their posts, and push back on the trolls.

And then keep following and sharing and supporting and buying their work, because if even you are uncomfortable with those bodies, imagine how much harder it is for the people living in those bodies to survive than it is for you.

2. Bring your online presence into alignment

Take a hard look at your own social media accounts. Whose bodies are centered there? Whose bodies are omitted? What range of bodies and lived experiences are you demonstrating that you value?

Is the primary body shown your own somewhat or fully socially-acceptable body? If so, what is that telling your audience and clients about acceptable bodies? Are you inadvertently implying that your non-diet services or practices will still deliver a body like yours?

Are you building a business on the backs of fat activists while failing to acknowledge or promote or compensate that labor?

(A reminder: Linda Bacon, who is a treasure of a human and a vital part of the health at every size movement, is just one of many many people who laid that groundwork, many of whom were and are fat. Look farther than just thin bodies when you look at movement history.)

3. Stop taking up the fat air in the room

This is a particularly challenging one, because all of us at every size can experience body image issues and we’re all affected by fatphobia.

But if you live in a small or medium-sized body, stop taking and using the language that fat folks use to describe our bodies. Separate how you might feel about your particular body from how it is perceived culturally.

Stop calling your rear end a “fat ass” if your ass is not, actually, particularly fat. Stop posting photos where you’ve slouched way over so that you can point to tiny fat rolls. Stop calling small B-shaped bellies “FUPAs.” That means something, and it’s not “the lower half of my belly.” Stop calling yourself “fat” if you wear a clothing size smaller than a U.S. 12/14.

When you act like your body is at the very large end of the body size spectrum and it’s not, you increase fatphobia by limiting your audience’s imagination and ability to empathize with bodies that you’re implying don’t even exist.

4. Put your money where your mouth is

Extra credit: Find a fat activist or fat acceptance advocate and buy whatever they’re selling. If they’re not selling anything, donate or subscribe to their Patreon. If you can’t find a way to contribute, ask them. Do this again next month, even if it’s only a few dollars. 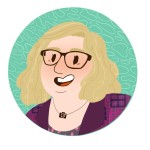